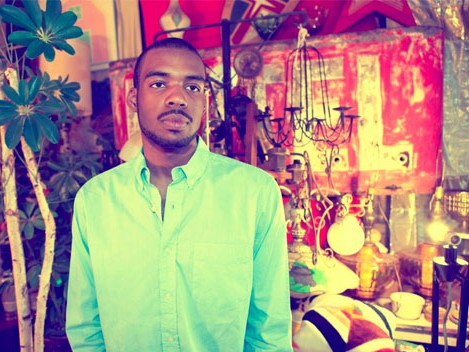 Here goes another Tuesday Techno Time! This one is on one very young house (wait, wait. it’s getting more T than H below) producer, Kyle Hall – or KMFH, his moniker.

I was always torn about his music, with his tracks either blowing me away due to insane beat shuffling (if you can find one proper placed bassdrum in this track let me know) or making me hate them due to their simplistic melodies. Still, he produces some quite cool stuff that always borders on “Detroitiness” (great article about detroit techno and house) in its melodicity and alludes in rhythm to my personal all time hero Theo Parrish.

His debut album Boat Party just got released and, on it, K again tears it apart. Half of it is house, slow playful. The other half is Techno, ladies and gentlemen, and here we arrive at todays feature: Dr. Crunch, a straightforward dancefloor banger which still manages to keep the KMFH spirit of bending the timing.

Since young KMFH recorded the track to a cassette tape let me quote him elaborating the production in this article:

“”Dr. Crunch” was created with two pieces of gear: The Alesis SR-16 and Nord Lead. I had the SR16 (which is a really basic digital drum machine) from the early ’90s doing a few drums, but at the same time having it send MIDI note values to my Nord Lead. From there, I would just tweak some of the parameters on the Nord while my sequence was running. As far as signal path goes, I was overdriving the sounds through a cheap old analog 12-channel board and recorded it straight to a Maxell cassette tape. I really like the nice harmonic saturation you’re able to achieve by slamming machines to tape. After I made the track, I found out the board used to belong to Carl Craig and he told me that he did a lot of his 69 project on that board. It’s really funny sometimes how gear travels between producers here in Detroit, even amongst different generations! That board probably has about 15 years on me.”

For pure bent beats please a second track off his album: Measure2Measure. I still love house, even if it’s Tuesday.